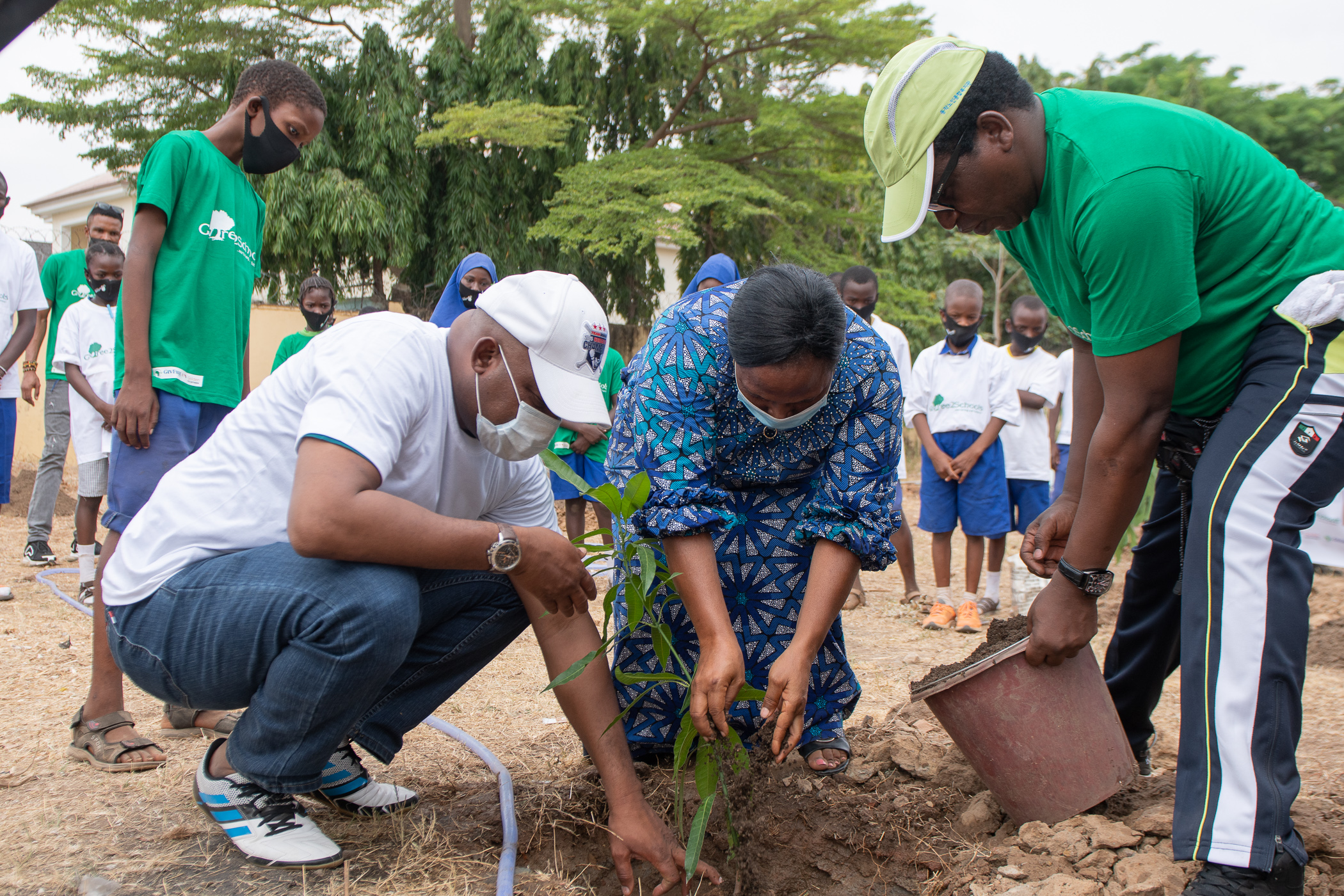 The GivTree2School Project was successfully launched at the nominated model school – Model Primary School, Maitama, Abuja, Nigeria, on the 11th March 2021. Present at the event was the GivFree Africa’s Executive Management Team, its Lead Volunteer members, the School Head Teacher, and other school staff. The GivTree2Schools Project launch was used as a tool to inspire and form a tree planting community at the grassroots level.

The GivTree club T-shirt was the official wear of the event. In that light, the school Head Teacher – Mrs. Catherine, the Assistant Head Teacher – Mrs. Nwachukwu, the first twenty (20) GivTree club member-students and Lead Volunteers plowed the ground and planted 30 varieties of economic trees – Orange, Avocado, Guava, Pawpaw, Mango, and Cashew – at the school garden. This exercise is continuous and it is aimed at connecting students to the benefits of trees & tree planting in our environment, join the global support for building tree canopies, reducing global warming, and also ensure that school pupils have access to healthy fruits in their respective schools.

The President/Founder GivFree Africa – Mr. Ibrahim Garba Wala in his introductory speech, emphasized the purpose and benefits of the GivTree2Schools Project, and on this note, the first GivTree club was formed, with Lead Volunteers and School Pupils taking responsibility for nurturing of the trees to grow.

The second spokesperson of the launching event was the School Head Teacher who at first commended and appreciated the good work of GivFree Africa and also for extending the project to the school. She was honored to initiate the first tree planting while everyone gathered around to see how it was planted, after which the pupils assisted by the volunteers and staff of GivFree Africa planted the other 29 economic trees. The planting exercise was followed by watering, fertilizing, and mulching the newly planted trees.

GivFree Africa on a final note presented the school with books, pencils, pens, and snacks in appreciation of the school management and its pupils for their contribution and support to the general success of the GivTree2Schools Project launch.

During the official Photoshoot, one of the participating pupils made a note of appreciation to GivFree Africa for making the Model Primary School Maitama the model school for the GivTree2Schools project.

The GivTree club will not only train these pupils on how to plant trees, but will also guide them on how to build and better their environmental stewardship, develop their immediate society, and most importantly, how to be an asset to themselves and the nation as a whole.

Help bring a life-changing future to your school today by being part of the GivTree2Schools club across schools in Africa.

“We want to turn schools into…